“Love her like you've never fallen in love before, Fall out of love with her, So you can remember...”See It Like A Baby 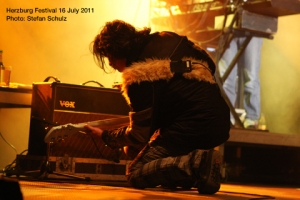 Just back from the studio after another jam session.. Something Arabic today.. Managed to get home despite the power-steering failing half way home. I now have arms like the governor of California. Or is he ex- governor? I probably have arms like one of em.. or one arm like both of em. When I got home I'd locked myself out so have just climbed through the "bog-window" and buttered the toast I didn't have time to butter before I left this morning. All in all, a fairly ordinary day. Will now go and have a listen to half formed song ideas in the hope of buttering them too.
h

Thanks to everyone who came & saw Robin & I at The Borderline last Friday. We really enjoyed ourselves. If you're interested our CD is available now at www.marillion.com/shop/albums/acousticindustry.htm
Pete

Back in the nineties when had my own label, Dorian music (before I decided I much preferred being a musician than running a record label) I was involved in a couple of albums,  the first  Wishing Tree album "Carnival of Souls" and an album by a young and highly talented progressive rock band called Mr So & So called &que Overlap". To try and increase the fanbase of the band they've made them available to download for free from http://mrsoandso.bandcamp.com/album/the-overlap I'd recommend giving it a listen. They're a great band.
Steve R

Morning All....Went to the studio today and jammed for an hour with Pete and Steve Rothery..a couple of good moments... Also gave me the opportunity to try out my new DW 9000 bass drum pedals..very nice..Had to leave early for a dentist appointment...All glamour....cheers...
Ian

Apart from spending most days at the racket club with the boys working on the new album I've also been keeping myself busy with the Featured Artists Coalition. Last week, I had to go to London to give a 20 minute keynote speech to the Westminster Media Forum. I don't mind telling you that I was more nervous standing in front of that audience then when we've played to 50,000 people. It must be something about having a bunch of keyboards to hide behind.
Mark

Due to matters beyond our control, we have had to cancel our gig in Leeuwarden on the 30th November. This has been replaced with a gig at Den Haag - Het Paard on the same date. Ticket holders are advised that their tickets for Leeuwarden are either exchangeable for a full refund (please contact your ticket seller) or a ticket for the new venue.