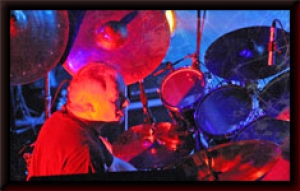 Steve Hogarth will be travelling around Europe with nothing but a piano and a microphone, playing songs from his entire musical career, sharing stories about lyrics, and answering audience questions! The h Natural tour kicks off this weekend with an appearance in Girona, Spain, before heading out in earnest next week, beginning with Paris.
Tickets are still available for several of the shows, and a few extra dates have been added in the past week - visit www.marillion.com/tour for complete details of these not-to-be-missed intimate shows.
Next, a chance to own a bit of Marillion history - Steve Rothery is making some space in his studio by selling his Roger Giffin custom double neck guitar on eBay along with a couple of amplifiers and a keyboard.
Also Steve's online gallery website www.postcardsfromtheroad.co.uk should be up in its preliminary form next week to coincide with the big feature about Misplaced Childhood in the next issue of Classic Rock magazine (using some of Steve's photos, on sale from March 8th). Steve hopes to add photos from every stage of the band's career over the next few months. Any web site designers interested in getting involved should get in touch with Steve directly at steve@postcardsfromtheroad.co.uk