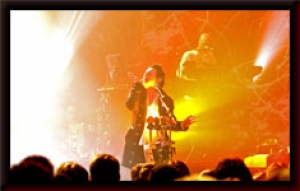 We hope you're all having a lovely summer (or winter depending on where you live!)
At the moment, we're taking it in turns to go on holiday with our families - whoever is not on holiday will be coming in to the Racket Club and continue to work on the new tracks we recorded earlier this year. We're hoping to play a few of them during our 'Not Quite Christmas Tour' this November and December... We are still adding dates and should have the whole tour confirmed and announced within the next week. If you haven't seen the handful of shows already posted, head on over to www.marillion.com/tour for dates and ticket details.
XM Radio subscribers don't need to wait until November to hear the band live! At the end of the 'Los Trios Marillos' acoustic tour this past June, h, Steve and Pete stopped by XM Radio studios in Washington DC to record a special set. This show will be broadcast Wednesday July 27 at 8pm EDT with encores on July 29th Midnight EDT and July 31 Noon EDT on XM 76, Fine Tuning "The World's Most Interesting Music".
Also for the summer, Racket Records has 5 great new T-shirts available - including 2 new women's shirts by popular demand - from Sunny Marbles to Hot-Rod Flames. Visit www.marillion.com/merch for pictures and the full list
As a final note, we have been asked many times when and where the next Marillion Weekend will be held. The band will be hard at work on the next album in 2006, so the next one will not be until 2007. Unfortunately, we're still working out the details so can't say where or when yet, but will hopefully be able to let you know later in the year!
We'll keep you up to date on the new tracks within the next few weeks...
Marillion