“Rise up to that blue space above the clouds..”The Sky Above The Rain 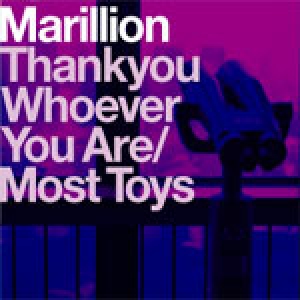 Pre-Order vs. High Street
We've had a lot of feedback about our upcoming single, Thankyou Whoever You Are/Most Toys (out on 11th June) and why we're asking people to pre-order it.
If you cast your mind back, you may remember the media fury that surrounded the single release of You're Gone. Why did we get so much attention? Well, it was because YOU lot (our devoted family) had pushed that release to the top of the pre-order charts on HMV, Amazon, Virgin, and several other major retailers. The media had to take notice!
We know a lot of you are holding out until the week of release to pick them up in your local high street shop... But the truth is, the physical singles market has been declining and your local record shop may either not stock the single, or only have a handful of copies (and won't re-order once they are gone!)
Because the brand new tracks will ONLY be available on the physical singles (and NOT as downloads from iTunes, etc.) we want to make sure that everyone who wants to get hold of them can do just that - so if in doubt, you need to pre-order - wherever you live!
Where can you do that? From HMV and Townsend Records (UK), and Muziek Kopen (Holland) - all of whom have their own particular special offers (from specially-priced bundles, to no postage charges)
Sorry if a lot of these emails have been sounding the same lately, but we keep getting loads of questions from you, so want to make sure everyone hears the answers.
UK In-Store Appearances
Marillion hit the road again for the final leg of the Somewhere Else Tour throughout the UK. The few remaining tickets are still on sale HERE.
To coincide with the single release, Marillion will be appearing at HMV in both Nottingham and Cambridge for a short acoustic set, followed by a signing session. Per store policy, the band will only be able to sign items purchased in the store - but this is the perfect chance to pick up your copies of the new single (both stores have assured us they'll have plenty of each single!).
12 June: HMV Nottingham, 38 Listergate, Nottingham, NG1 7EE, England. 17:00
13 June: HMV Cambridge, 12-15 Lion Yard, Cambridge, CB2 3NA, England. 17:00