“It was a mine and it was mine, And in the darkness I saw a perfect mirror...”When I Meet God 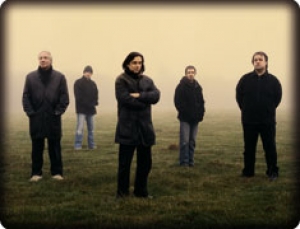 Loves,
h was invited up to London the other day to a little reception arranged by Richard Curtis. The purpose of this was to thank all the people who had helped this year with the Make Poverty History campaign. Marillion and our fans were thanked "personally" so we're passing the thanks on to anyone out there who wrote an email, a letter, wore the white band (I've still got mine on! h) or helped in any way, no matter how seemingly insignificant.
Make Poverty History isn't about asking you to put your hand in your pocket, it's about opening your mouth and telling your leaders that you will no longer stand for 50,000 people dying of extreme poverty EACH DAY in 2005.
Something HUGE had to be done. You did it. You started it..
BECAUSE you helped, the G8 summit achieved the following..
The 8 most powerful men in the world made this commitment:
$50 BILLION MORE AID per year by 2010, $25 billion for Africa
DEBT CANCELLATION for 18 of the world's poorest countries, with another 20 expected to follow once they can prove anti-corruption measures.
This money was COUPLED to the promise to:
invest in crucial things - good governance, peacekeeping and fighting corruption
get AIDS drugs to all those who need it, with up to 9 million people on treatment by 2010
take care of all AIDS orphans, with as many as 5 million children in care by 2010
protect 85% of vulnerable people in Africa against malaria which will save 600,000 lives each year by 2015
give ALL children a primary education by 2015.
IF OUR LEADERS KEEP THEIR PROMISES, THIS COULD SAVE 5 MILLION LIVES EVERY YEAR BY 2010
That's 12,000 lives EACH and EVERY day.
Are you proud of yourself? You bloody well should be. Well done.
Before the end of the year, have a word with Peter Mandelson about making trade FAIR in the world. And send Tony Blair a Christmas Card. Thank him for what he's done, and let him know you expect him to honour the commitments he made. Perhaps you could suggest a New Year's Resolution.. How about a commitment to give a few hopeless souls a break next year.
Whether you're in the UK or not, follow the link to Make Poverty History to see how you can easily give the "chaps upstairs" one last nudge before you settle down to the serious business of celebrating what really has been a great year for the world.
And while, we're at it, did you know that a report recently pointed out that there are about 5% of the numbers of wars raging in the world compared to 25 years ago that (even including Iraq) the numbers of fatalities in those wars are a small fraction too.
So, IT'S NOT ALL DOOM AND GLOOM!
Have a great Christmas everybody. There's much to celebrate.
h, Ian, Mark, Pete, Steve