“Somewhere you're drifting by, Your heels rolling sparks on the lucky street...”You're Gone 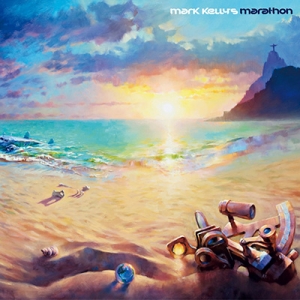 We hope everyone is back to normal after last weekend.

What a weekend it was! We were totally stunned and knocked out by everyone’s involvement in everything that went on from Steve Rothery’s late night cocktails (what a shirt!), Pete's Bass Masterclass, h's live podcast, Ian's Drum Q&A and Mark's early morning fun run and all the music, chat and fancy dress in between.

It was fun for us to be in the audience too, reading and reacting to all your comments as the shows were streamed.

The crew tip-jar was overflowing from your generosity. You raised a substantial sum for our wonderful crew.

The money will go a long way to helping them survive a difficult year.

Thank you!
We are now back in the Racket Club, heads down and brows furrowed as we work on the next album.

All being well we should complete it sometime in 2021.

Earlier this year, while we were in lockdown, Mark used the time to complete his long awaited solo album.

The band is called Marathon and you may have seen the first “single" Amelia, on Saturday night during the Support Band slot.
The album will be released on the 29th of November and it’s available for pre-order now.

The first 1000 copies of the Limited Edition CD / DVD will be signed by Mark.