“Get out of here, Get out while you can, Choose life, strive for essence...”Essence 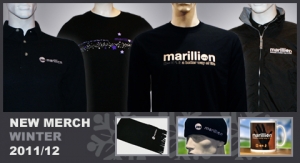 In case you missed the news last week here it is again! - With some new
updates!

The band will be back in the studio straight after Christmas to dig in deep
and finish the new Marillion album which will be released sometime in 2012 -
when we have more details you will be the first to know.

Meanwhile in between all this Marillion work, Pete and Mark have been busy
with some new side projects - CD's are available to order now.
http://www.deeexpus.com/ - features Mark on Keyboards
http://www.edisonschildren.com/ - Written and produced by Pete Trewavas and
Eric Blackwood - this also has guest appearances from all the members of
Marillion!

A word from Mark on the DeeExpus album:

This coming Saturday on the 3rd of December DeeExpus will be having an album launch party. If you would like to join us at a secret location somewhere in the north-east of England (details will be sent by email when your request to attend is confirmed), Please send an email to party@dxps.com with a short note about yourself and why you are the life and soul of the party etc. and we will be in touch. Be one of the first to hear the entire “King of Number 33” album, buy it and get it signed by the whole band and wake up with your own DeeExpus hangover on Sunday. If you would like to hear a sample of the album head over to http://www.marillion.com/shop/albums/king.htm.
Thank you to everyone who has pre-ordered the “King of Number 33”, your copy will be shipped out from Racket on Monday.  For those who haven’t, what are you waiting for?

We haven't been slacking here at the studio either - we have loads of new
merchandise on offer for Christmas, including hats, scarves, new waterproof
jackets, polo shirts, t-shirts and mugs.
http://www.marillion.com/shop/index.htm

The Friday night show from our convention in Holland, entitled 'Holidays in Zelande' is now in and shipping out across the world as we speak. This DVD features the whole of the Holidays in Eden album plus all the encores. We recently held a cinema screening of the DVD to a few fans from our UK fanclub and they gave it a resounding thumbs up. So order yours now:
http://www.marillion.com/music/dvd/zelande.htm

Thanks again from the band to all of you in North America for
purchasing your tickets for the shows in June 2012.  Over half the tickets
have been sold already!  Limited Edition tour t-shirt to commemorate the
tour can be found here:
http://www.marillion.com/shop/clothing/ustour.htm

Lastly, as we announced recently, the band will return to South America in 2012 -
for the first time since 1997 - keep an eye on www.marillion.com/tour for
tour dates for this and other exciting gigs elsewhere in the world that we
will be announcing over the coming weeks and months.  2012 is shaping up to
be a great year.