“Dead yet alive, Gone but shouting anger, Gone but talking perfect sense...”A Voice From The Past 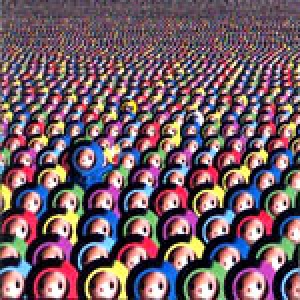 ANORAK IN THE UK - PRESS RELEASE
Release Date: 22 April 2002
Marillion.
Still here.
Still original.
Still one of the world's most compelling live acts . . .
Throughout their career, Marillion have delighted in attacking musical conventionality and have succeeded in forging a distinctive identity that continues to surprise and thrill some twenty years after the band's inception.
Always a vastly entertaining live act, the band toured extensively during 2001, including a sold-out gig at the London Astoria that vocalist Steve Hogarth rightly regards as the finest show the band have ever played in the capital. The material collected on this album has been drawn from some of the sold-out and boisterous shows during the UK leg of the tour in May 2001. Including material from last year's successful 'Anoraknophobia' album (the first release by a major act to be entirely funded by pre-ordering fans) as well as live favourites 'The Great Escape', 'Easter' and 'King', the collection captures Marillion at their most creative and engaging.
On 5/6/7th April there is a world-wide Marillion convention at Pontins in Brean Sands, Somerset, with over 22 countries being represented. It includes such highlights as a live performance of the 'Brave' album, a chance to perform on stage with the band (replacing one of the band members) and the Marillion lottery - whereby the band play whatever tracks the lottery throws at them. There will also be a Marillion Museum, which will feature rare memorabilia, including instruments, lyric sheets, posters, vintage T-shirts, and even the Strange Engine itself! This fantastic event has already sold out, and 1800 fans are due to attend. For more information go to www.marillionweekend.com
There are few bands whose live performances get better year after year and who continue to surprise and entertain. Marillion are one of them...
Track Listing:
1. Intro
2. Separated Out
3. Quartz
4. Map of the World
5. Out of this World
6. Between You and Me
7. The Great Escape
8. King
9. If My Heart were a Ball it would Roll Uphill
10. Waiting to Happen
11. Easter
ANORAK IN THE UK LIVE
Jon Hotten , Classic Rock, May 2002 (3 out of 5 Stars)
Prog rock in the sense of Radiohead rather than ELP.
Unfashionable like antique furniture rather than mullets.
It's a cute title, and one based on an admirable sentiment. Steve Hogarth has said that Marillion have adopted the anorak motif as a measure of pride in their lasting commitment to passionate music-making regardless of fashion or sales figures. And boy, are Marillion unfashionable. There was the laughsome scene in a recent airline docusoap wherein the band attempted to convince a couple of giggling Sharons on the Easyjet ticketing desk that they were famous. Much jabbing at an issue of this magazine and an offer to perform a tune on the spot ensued.
But if they think back, Marillion will remember that they and fashion intersected for only the briefest of periods. It just doesn't matter. It may sting, but in place of critical appreciation and Sunday supplement profiles, they have something far harder to obtain: the lasting respect and admiration of those fans who have followed them for so long.
They can be a wonderful, idiosyncratic and dramatic rock band, as this album proves. 'Between You And Me' and 'Quartz' are as vital as 'Easter', a song written a decade ago, and they're edgier, too. Marillion will never be lauded like Radiohead, but they can remain as impervious to the outside world as Pink Floyd. This is another strong record from a band who are slowly ascending towards the rank of national treasure.
ANORAK IN THE UK LIVE
Tim Jones, Record Collector, May 2002
One of the most unfairly berated bands in Britain are, in fact - one of its best live rock acts. Anyone who's actually listened to their most recent albums will know that there's as much for fans of Crowded House to like about Messrs Hogarth, Rothery et al as Ozric Tentacles or Porcupine Tree. And this 10-song recording from London's Astoria in 2001 saw them on dazzling form- despite some head-up-the-rear music press notices from the reviewers at the time.
Throughout , there are exhilarating combinations of rangey vocals, incisive guitar, rompey rhythm and bright keyboards, the latter sounding Doors-like on 'Separated Out', while the sunny acoustic-shaped 'Map Of The World' would make the Top 10 if it was released by an upcoming indie outfit.
Other highlights include the nine minute crescendo-laden trip, 'Quartz', the Floydian melancholy of 'Out Of This World' and the rousing 'Between You And Me'. Granted, other tracks veer more to the band's progressive past - but with hints of crisp jazz balladry and sweet electric rocking rather than a blind stumble down self-indulgent noodle alley. Buy into it - if you dare."